Home > Blog > Brasov Guide - What to Do in Brasov?

Brasov Guide - What to Do in Brasov?

Brasov City Guide - What to Do in Brasov?

Brasov is a picturesque city with a beautiful medieval heritage located in the heart of the mysterious region of Transylvania. In recent years, Brasov has become one of Romania's most popular destinations, and the reasons for that are many.

The city has a beautiful historic center with enough attractions that can hardly be explored in one day. You will be welcomed by a lively atmosphere with a wide gastronomic offer and numerous terraces where you can relax enjoying a local beer.

And, if that is not enough for you. There is an excellent base to explore other destinations that created pictures of Transylvania that we all dream of.

In fact, a short distance from Brasov we find the famous castles of Bran and Peles, the citadel of Rasnov and other places less known as dreamlike villages with fortified churches that are part of the UNESCO World Heritage list. 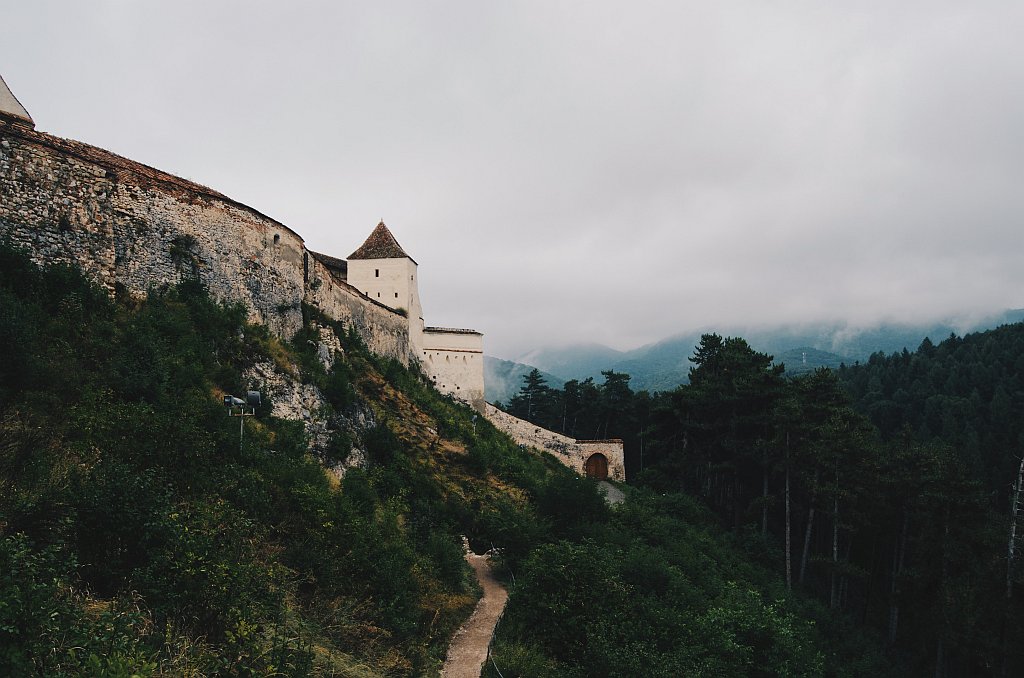 Brasov attractions are simply spectacular. The city is surrounded by the mountains of the Southern Carpathian Mountains and has a good number of Renaissance, Baroque and Gothic buildings that place it as one of the essential cities of Romania.

There are numerous gems to be discovered. However, the most memorable tours start from the heart of it all. The main square from where the history of Brasov was written and directed. 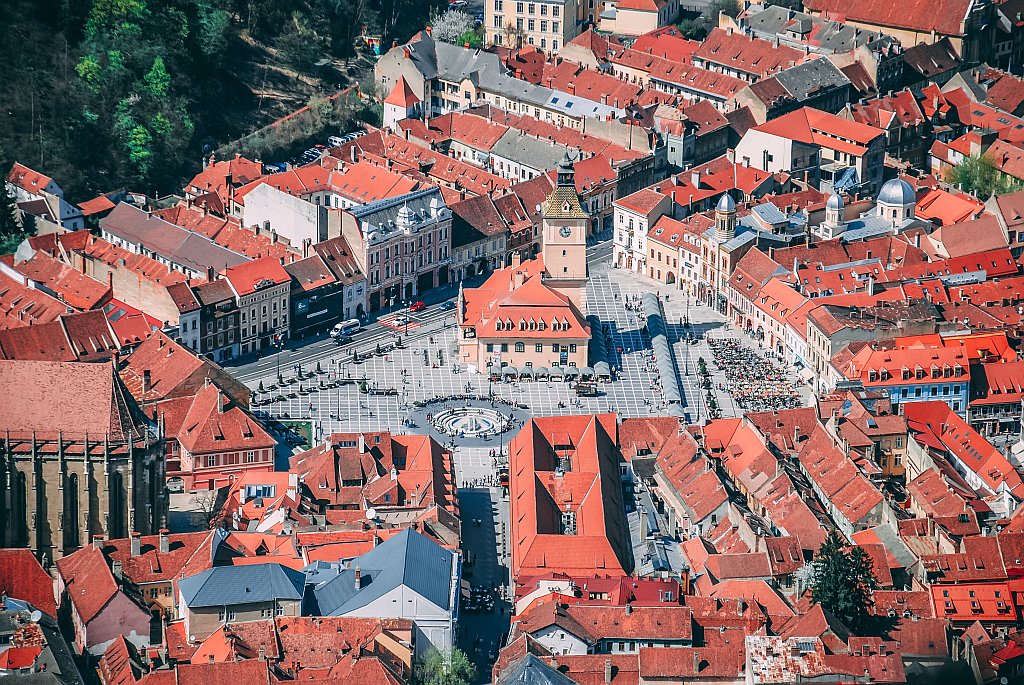 An excellent place to start the exploration of  Brasov is the Piața Sfatului or Council Square. This is the main square of Brasov and the place where the market was historically held. It is a large square and in which there is always a lot of atmospheres, especially if you go in summer.

In the center stands the City Hall building (Casa Sfatului) whose origins date back to 1420, although the current architecture responds to a modification of the late eighteenth century.

The square is surrounded by a beautiful set of pastel-colored buildings (18th and 19th centuries), among which is a synagogue, a couple of museums and, at the other end, the Black Church.

All under the watchful eye of Mount Tampa with its unmistakable Hollywood-style poster that is so popular in Romania. 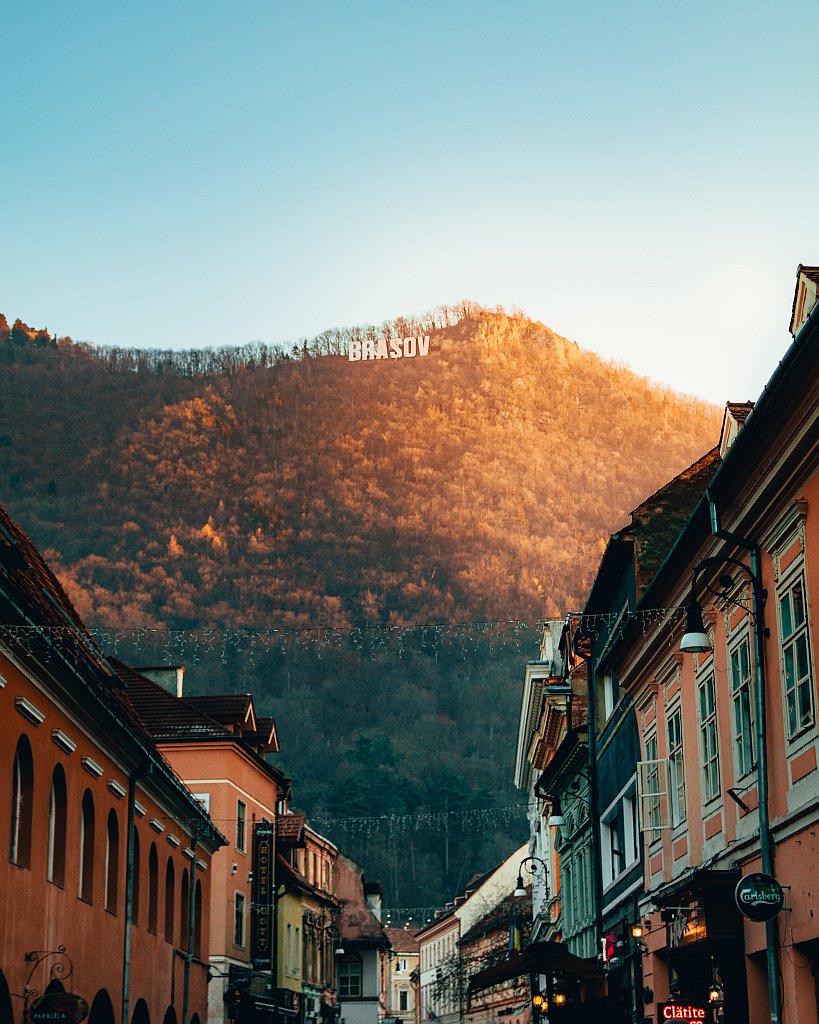 Another of the essential visits in Brasov is the Biserica Neagra or Black Church. It is a huge church built in the 15th century in the Gothic style that dominates the historical center of Brasov. The first thing you will ask yourself is why does it have such a name since the church is far from black.

The answer is found almost always in history. In 1689 there was a great fire that swept virtually the entire old town of Brasov, including the church whose walls were blackened by the flames. Well, it goes without saying that, hence its name.

You will be struck by the size of the church, which is emphasized when you see the city from above. Oh, and did you know that it's the largest Gothic church between Istanbul and Vienna? The surprise will be justified to say at least! 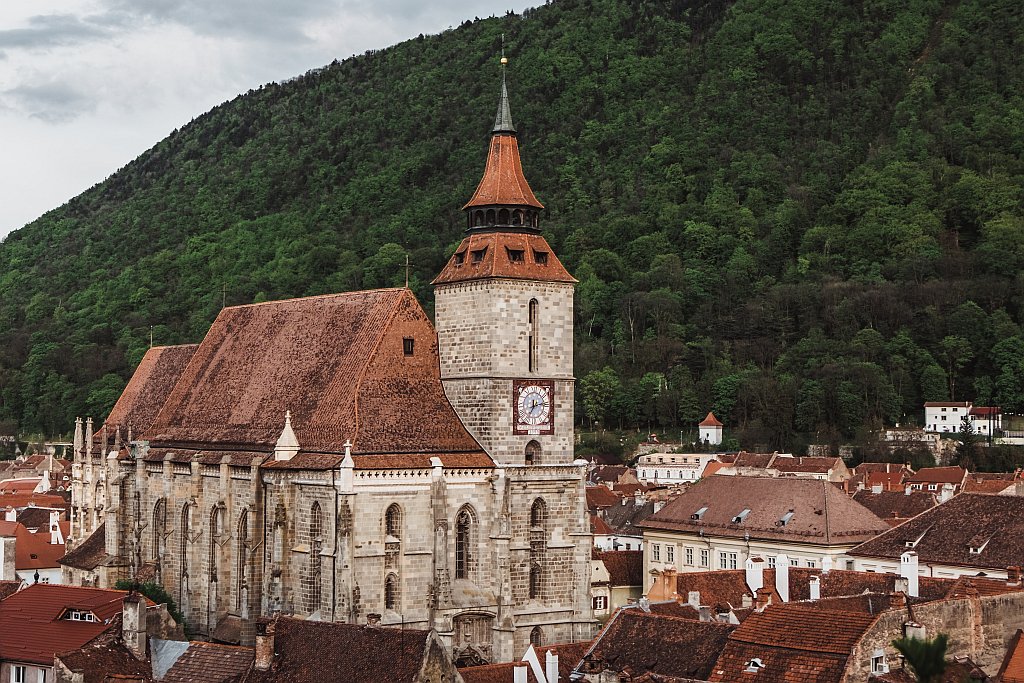 Streets of Brasov and the Famous Strada Sforii

One of the things that make Brasov so special is their beautiful and one of a kind cobblestone streets and the backdrop with the thicket of the dark forest of Mount Tampa. The contrast with the colored buildings gives this Romanian city a unique touch.

The curiosity to walk through one of the narrowest streets in Europe will lead you to Strada Sfori. It's a street that is only 83m long and at its narrowest point is just over a meter wide.

It was initially built in the fifteenth century as a passage to facilitate the passage to firefighters between Cerbului streets and Poarta Schei within the medieval framework of Brasov.

Mount Tampa is a 960m tall mountain that rises near Brasov and whose most characteristic element is the giant Hollywood-style Brasov sign.

Many visitors start the exploration of Brasov from this point, and we ensure you that Brasov's panorama from above is impressive to say at least.

Although there is a cable car that takes you to the top, you can also do one-hour trekking up the hillside.

The Santa Catalina Gate is the only one that has survived the five entrances that the medieval city of Brasov originally had. It was built in 1559 and owed its name to the monastery of Santa Catalina that was in that same place.

One curious fact to tell you is that the door of Santa Catalina was the only door that Romanians could use to access the city. And only for commercial purposes and after payment of the corresponding fee.

After the arrival of Saxons to the surrounding lands. The Romanians were forbidden to own property within the walled enclosure, being forced to settle in the surroundings of the city, mainly in the current Schei neighborhood.

The breath of historical heritage that you will find here is inspirational and full of colorful stories. Be sure to carefully listen to the stories of locals and the turbulent history of the place will slowly start to unfold in front of your eyes.

Towers and Fortifications of Brasov

Did you know that Brasov was known as the city of the seven bastions?

Brasov's defensive past brings cause in the numerous invasions that ravaged this region and forced Brasov's rulers to endow the city with numerous defensive elements.

Walls, bastions, towers, and a citadel are some of the defensive remains that are preserved from the ancient fortified city of Brasov.

Check out the weavers' bastion, walk along the walls, climb the black and white tower and see the citadel of Brasov from afar.

Bastion of the Weavers

Each of Brasov's seven bastions was controlled by a guild. Of all of them, the best preserved is the Bastion of the Weavers, built between 1421 and 1432.

The White and Black Towers

The white and black towers formed the first line of defense of Brasov. Both towers were built in the fifteenth century and were outside the walled enclosure of the city.

The best thing about the visit to the towers is its elevated position that will allow you to have a fabulous view of the historical center of Brasov. 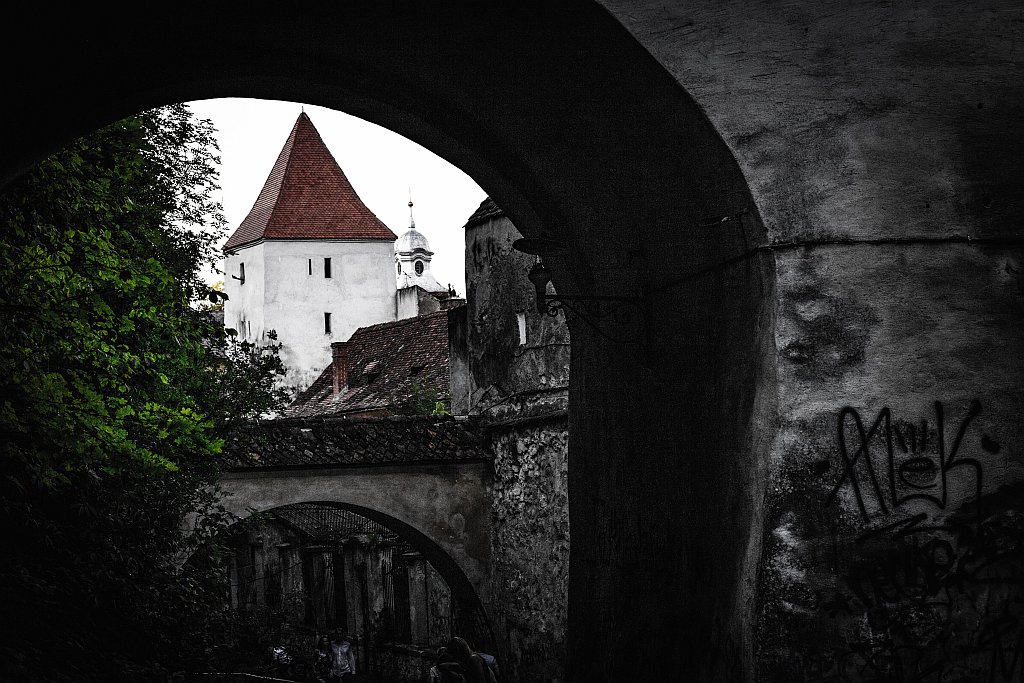 Dominating Brasov on a hill, this fortress that was added in the 16th century to complement the defensive system of the city.

There are exhibitions of weapons and medieval armor as well as a restaurant where you can have a relaxing break in charming surroundings.

Some of the best memories in Brasov will undoubtedly be created in the Strada Dupa Ziduri, a picturesque street that runs between a small water channel and the old walls of Brasov.

One of the most interesting points is the Bastion of the Canal (Bastionul Graft), built at the beginning of the 16th century, which is connected by a staircase with the beautiful white tower.

To end the exploration of Brasov, it is worth approaching the Schei neighborhood that is outside the old fortified site of Brasov. As we told you before, this was where the Romanians were forced to live for years since only the Saxons could live or enter within the city walls.

In Schei, you can not miss the church of San Nicolás, an orthodox church with striking pointed towers. It is the oldest church in Brasov since its origins date back to the 14th century.

However, the current architecture responds to the modifications made in the 18th century in the Baroque style. Next to the church, you will find the first school in the country where the Romanian language was taught.

Where to Eat in Brasov

The best known gastronomic establishment in Brasov is Butoiul Sasului. Calling this establishment, the regular restaurant is close to impossible. Since in addition to the beautifully formalized exterior, it includes two coffee shops, an elegant bar and a selection of wines, which is considered the best in the city.

Butoiul Sasului is situated in the historical part of the city, and the first tavern in the place of the complex has still appeared during the Middle Ages. Today the restaurant offers guests a wide selection of national dishes and collectible wines.

In the cafeteria, they serve the vast set of exciting snacks and salads and the bar surprises with the choice of drinks compared to its prices. During the summer season, the part of the coffee shop tables gets relocated to the open terrace where you can enjoy a relaxing view.

How to Get to Brasov

Brasov’s proximity to the capital of Romania makes it one of the most visited cities in the country. In this way, we have multiple ways to arrive both by rental car and by public transport or even with organized excursions. Let's see what the best options are.

»Via Rental Car - It is one of the best ways to get to Brasov. In just 2 and a half hours, you will cross the 170 kilometers that separate you from Bucharest.

In addition, a rental car will allow you to visit other nearby places of interest.

»Via Public Transportation - Both Bus and Railway public transportation are available daily from Bucharest to Brasov. You can check prices and reserve your place on the official Romanian Railway website.

»Via Organized Tours - It is also one of the most demanded ways to visit this beautiful city and some of the essential surroundings such as Bran Castle or Peleș Castle. 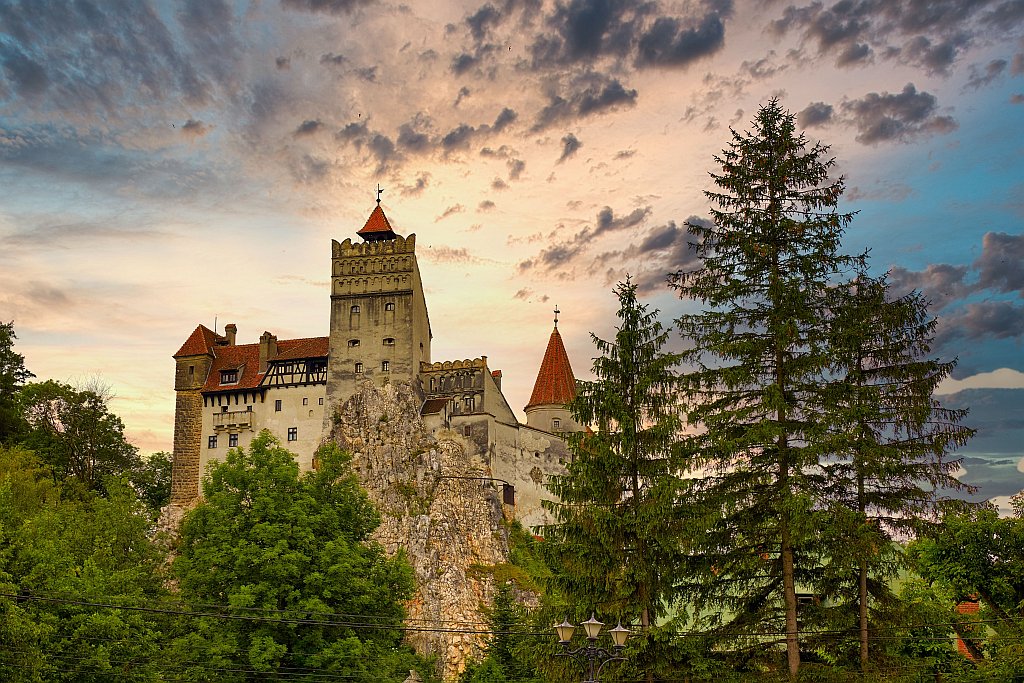 5 Awesome Stag Do Activities in Bucharest

5 Cheap Stag Do Destinations in Europe When it comes to organising a stag do, the very last thing you want to be stressing over is the cost – after all, you can’t put a price on fun! But you’ll...

Unusual Stag Do Activities in Bucharest When it comes to organising a Stag weekend, you’ll want to pick something that will start the party off with a bang. Bucharest is known for being one of t...